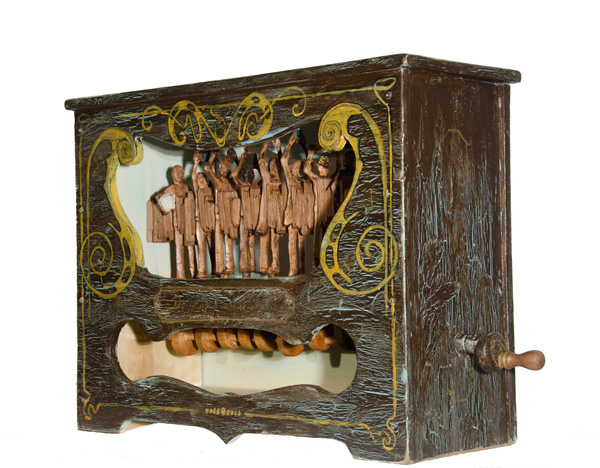 Artists of all stripes tend to continue doing what they do best, keeping to the path that led to their success. How do they move themselves onto a new track? Often the nudge is provided by other artists–their company and their work. This exhibit demonstrates an innovative prod. The nineteen artists know each other well and have established a bond that enables them to follow each other with trust. Many of the artists participated in a similar project, Beyond Words, in 2008, so they were familiar with the concept and could be sure of its success.

The idea of the project came from the party game Whispers in which someone murmur s a sentence to the person next to him, who whispers it to his neighbour, around the circle until the last person announces what he has heard.  The original “sentence” in this case was the photograph by Freeman Patterson. Because so many artists wanted to participate, the group decided to divide into two streams, each stream ending with a writer.

The two closest to the original did indeed follow Patterson’s image faithfully in colours and shapes, but over the course of the streaming, extraneous ideas crept in. One artist thought that because it was a Patterson image, it must a landscape, which it wasn’t. Another got the idea that the original photograph had to do with going on a journey. How strange the creative mind works.

What the group couldn’t have predicted was the strong influence of John Murphy who was to participate in the exhibit and whose unexpected death profoundly affected them all. After Murphy’s daughter Alison received Sue Hooper’s art work, the original colours remained in her tapestry but not the shapes. She added a black figure, death.  Fred Harrison, in the second stream, made the stone ledge from a pair of overalls Murphy left behind. The last of this stream was the poem by his widow. The influence of Murphy was so strong, that the group decided to dedicate the exhibit to him.

The artist statements provide an intriguing insight into the way each person was stimulated by the art work they were following. Their own regular creative process was interrupted, if ever so slightly, by the necessity to interpret the murmur they were hearing. Suzanne Hill had to borrow paint because the colours of the photograph were not in her usual palette.

I’ve been following the project from the beginning and was present when the pieces were introduced at the Hooper Art Centre, first Patterson’s photograph, and then two by two the pieces stimulated by it as the whispers went round. The ambiance at the unveiling was joyous, the camaraderie heartfelt, the creative spirit palpable. I was almost convinced that I too could have made something splendid.