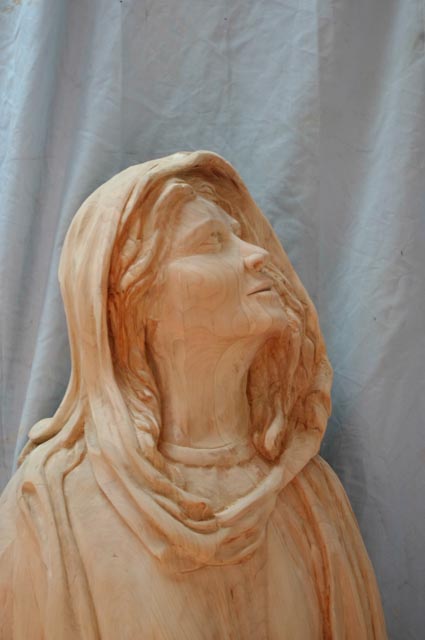 The sculpture, carved from laminated cherry wood and oak

“The sculpture, carved from laminated cherry wood and oak is in keeping with the crucifix as well as the other carvings and furniture in the church. I chose to sculpt the figure of Mary in high relief so that when it was placed in the church it felt equal in scale to the crucifix; thus adding to what was already established in the church. The stance of Mary looking up at her son, knees bent in a moment of weakness directs the viewer to appreciate what she is looking up at and then back to her, to consider what she might be feeling. The sculpture is seeming to be in conflict with two of the emotions that surround death. The right side, the one we view mostly from the sanctuary, is that of releasing and letting go. This expresses the point of acceptance, the time when she realizes that this is for the greater good. (The right side honors Pat’s wishes to make her look beautiful) The left side of the figure is obscured, for the most part in the relief, except for the hand that is clenched in a grip of grief. This is the side of Mary that doesn’t want to let go and the feeling of this struggle points to the grief when we are forced to let go much sooner than we expect. There are many more emotions that have been involved in this sculpture from the time it was first conceived, until now. I will leave the rest for you to interpret and allow Mary to speak to you.